Wonder why your friend, family member or significant other is behaving erratically? Why are they so angry so much of the time these days? They’re either not around, sleeping, wired or paranoid. Hmmm. Could be drugs. Maybe not; maybe just, “going through a phase.” Or, repeat, could be drugs. Methamphetamine. Speed. Tough to live with, very tough to kick and almost impossible to do occasionally, meth has been around since the late 1800’s, used openly during World War II (airmen’s or tank chocolate), and was around in various forms in the sixties. Wasn’t Everything around then? Out here in the wild west, meth has made a recent resurgence. It is the third most used and abused drug, right after alcohol and marijuana, a bigger and more serious abuse problem than cocaine and heroin. Relatively easy to acquire, either to buy or to make with readily available ingredients, methamphetamine (crystal, ice, crank etc.) is a cheap drug. 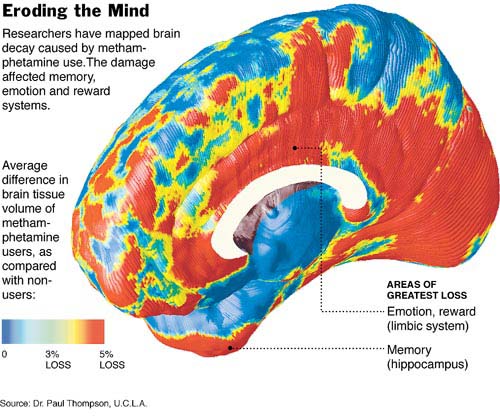 A rapid high, similar to cocaine, more intense depending on drug quality and route of administration (it can be can be snorted, smoked, eaten or injected), meth is known for it’s immediate gratification, one of the main reasons it is so addictive. Besides depletion of dopamine and generally messing with neurochemistry, methamphetamine is directly toxic to the central nervous system, the brain. Coming down from or off of speed can trigger depression, anxiety and severe fatigue, but does not result in the dangerous physiological withdrawal of potential seizures that occurs when stopping benzodiazepines and alcohol.

For the addict (don’t know if you are one? If you try to find out by using this drug, you may never stop. One is too many and a thousand will never be enough), ongoing use of meth results in unbelievably intense craving, addiction and physical as well as mental deterioration. Weight loss, tooth decay (meth mouth), insomnia, anorexia, severe anxiety, cardiovascular damage (heart attacks etc.), seizures, paranoia, crawlies (sensation of bugs under the skin), abscesses from shooting up or scratching imaginary bugs, and more…on to brain rot, similar to either stroke or dementia like Alzheimer’s disease, are the usual results. Oh, and death.

One recovering addict still gets a physical sensation when she looks at a picture of amphetamine, either in the form of those very tiny and innocent appearing tablets (white crosses), or in ice (crystal) or powder form. She has not used this or any speed for over 25 years. Think the drug might be powerful! Think there might be a neurochemical basis for a simple picture triggering signs and symptoms like rapid heart rate, salivating and apprehension?

Another addict began using this highly addictive stimulant and went from 230 to 170 pounds in a month. This white powder diet, complete with life-threatening side effects!

The good news is that there is recovery! Treatment centers that have experience with meth addicts have found that the solution is the same as with other addictions. Go figure! Getting clean is just the beginning; there is this little part about staying clean. The odds of an addict getting and staying clean are not good, but if it is you, and you are willing to do what it takes to get and keep recovery, your personal odds can be 100%. In one enormous study of speed freaks from California, only 10% of those who went to treatment for thirty days were still clean two years later. The ones who stayed clean did two things:

They did not switch to Xanax, Heroin, Adderall (a prescription amphetamine, commonly scammed from doctors, then snorted), or any other little white, blue or orange pills or even alcohol.

Addicts successful in recovery remain abstinent from all mind altering drugs AND embrace a recovery program. They do more than simply attend meetings; they do what others who are clean and happy have done, what we fondly refer to as, “the work.” Addicts living happy, healthy and productive lives free from all drugs, offer hope, as well as help, to others who have been where they are. Find them in twelve step meetings.

If Crystal Meth Anonymous is available where you live, check it out; it’s free. You have already paid enough. If C.M.A. is not available, try N.A. or A.A. for help.