Is there anything worse than to not want to go on living? Seeing no end to unbearable pain, 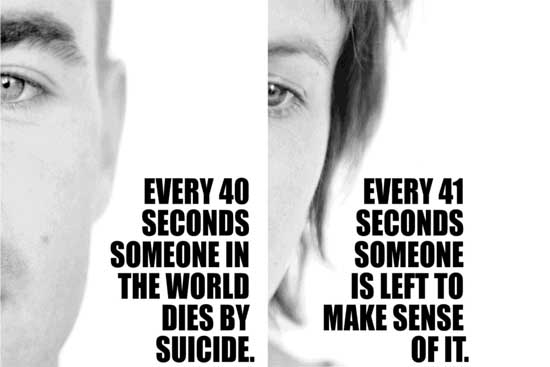 unable to imagine joy, peace or simply absence of anguish, the suicide victim is desperately isolated. Last week another friend succeeded in suicide. His pain is gone and his friends and family are grieving, each one wondering how he or she could have possibly made a difference. The survivors now suffer their own pain, some blaming themselves, perhaps believing they contributed to his desire to die, others blaming themselves for not realizing he was in such agony. When someone takes his own life, it is not the fault of friends and family. If the suicide victim was an adult, you did not cause the pain or his inability to resolve it. Neither could you cure the pain, even if he allowed you to know how hopeless he was feeling. Do not blame yourself.

My grade school friend, Sange, killed herself twenty years ago, escaping a destructive marriage and leaving two small children. Living in another country, she did not have access to the type of therapy and hospitalization we have, and as far as I know, she turned to nobody for spiritual guidance. Only some of the factors that caused Sange the intense, searing hurt which precipitated her death are apparent. Was it the unresolved chaos of her painful childhood that surfaced with the birth of her own children? Was her husband a repeat of her verbally abusive father? Both of these are likely.

Some years ago, when my physician friend J. A. killed himself, his adult son and daughter spoke at the funeral, saying wonderful things about their father. The son interpreted his father’s death as a courageous end to a brave life. He acknowledged the nearly constant emotional and spiritual pain his father had felt for as long as anyone could remember. J.A. had been severely emotionally abused by an alcoholic father. As children do, he blamed himself, internalizing the message that he was just not good enough. A lifetime of excelling did not erase the words of his raging father: lazy, bad, stupid, the cause of the father’s drinking and all of the family problems, and worse. Perhaps more effective therapy might have taught J.A. to give himself new and different messages. Maybe the self hatred would fade; maybe not. The therapy he had was marginally helpful and he chose to attempt to cover the pain, first with performing, trying through athletics and professional excellence to prove his father wrong, to finally be good enough. Later he tried wealth and material goods to feel better. When all of that stopped working, he, a practicing physician and surgeon, turned to alcohol; when alcohol no longer silenced the echoes of his father’s words, he used stronger drugs. Unable to find an escape, he could no longer handle life. Courageous? I understand why his son says this.

Is there another way? Maybe. There is evidence that spiritual recovery from anything is possible. There is additional evidence that miracles happen, that there is a God and that He can and does heal. Believers seek God and allow Him into their lives, giving Him a chance to soothe their pain. Counterintuitive, distasteful and objectionable for some, easy for others, and a last resort for many, spiritual healing surpasses emotional and physical healing for those who allow. If you are open to the concept that we are more than physical and emotional beings, that there is more to life than we know now and that there may be something greater than you, consider seeking. Find others who have incorporated some spirituality into their lives. Become open to learning and even changing your mind about long held beliefs. Seek, search, explore.

If you are considering suicide, tell someone and ask for help. Call a suicide prevention line, a therapist, a religious or spiritual counselor or a family member or friend. Don’t leave without trying everything! Pain can be resolved and healing can happen. The harm you do to those you leave behind is permanent.